Among traditional incandescent bulbs, the filament that is not in direct contact with anything is the only source of heat. For LED lights, the LED is the light source, and the heat dissipation of the LED is directly in contact with the LED bulb. This direct contact is governed by the way the LEDs are connected to the driver circuitry. In order to achieve heat dissipation, heat must be released from the LED and driver circuits or managed effectively, and this is the basic premise for keeping the LEDs working for a long time.

To understand the importance of thermal management, we might consider an application that replaces the installation of LED lights on general lighting sockets such as wall or ceiling lights, and uses wall switches to control the LEDs. Since the heat dissipation of most standard lamps, such as wall or ceiling lights, is primarily dependent on thermal convection or airflow, the heat dissipation of this application is less than ideal for LED lamps.

Method 1: Use NTC in a voltage divider circuit that enforces a known voltage in the system, and then measure the voltage on the NTC node. When the NTC temperature rises, the resistance decreases. A decrease in resistance will result in a change in the divider ratio. The voltage at the NTC node also drops as the temperature increases.

Is the temperature too high or is the LED fault?

When the lumen output of the LED lamp drops, it is important to know whether the LED output is degraded due to an excessive temperature environment or because the LED has failed. We can use an indicator that shows the drop in lumens to determine the cause of the drop. 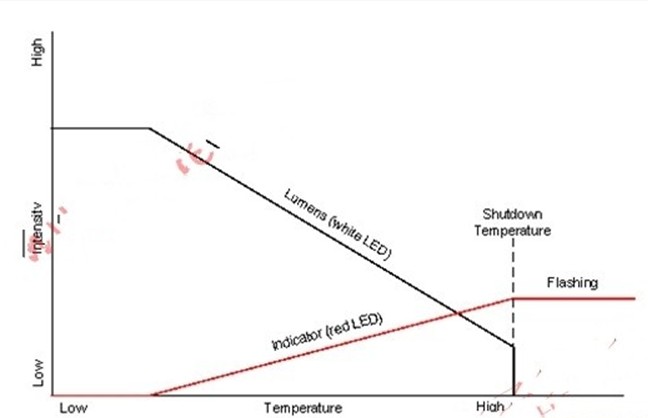 When the lumen output is at the lowest intensity and the temperature of the LED light is still high, the red LED indicator can also serve as an alarm for serious problems. In the alarm mode, the red LED will flash continuously with the white LEDs all off.

The block diagram of Figure 3 shows a generic LED driver and LED controller with an NTC and an alarm indicator. A common LED light contains an LED driver that is configured to provide a set current through the LED. The drive cannot reduce lumens based on temperature. The temperature monitoring provided by the drive can only be used for self-protection and is completely shut down at very high temperatures. 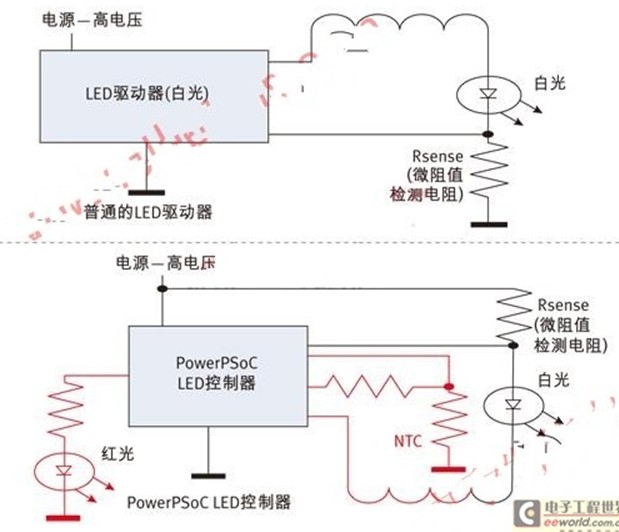 The LED controller has all the control functions of a common LED driver and enhances the intelligence level of other functions such as temperature monitoring, communication and dimming control. The blue part of the block diagram is the basic module and components of the LED controller. Components shown in red are not required for basic operation, but are shown for the NTC and alarm functions described herein.

When an ordinary LED is added to the NTC, the LED can be turned off in a controlled order when the temperature reaches a preset limit. The two red components (resistors and NTCs) on the right side of the LED controller are configured according to Method 1 described in the NTC Operation section. The controller provides a precise voltage to the resistive element. The voltage at the NTC node is measured by the controller to be converted to the corresponding system temperature.

The alarm mechanism allows the LED to indicate an increase in temperature and to the extent that it must be turned off to ensure safety. The two red components (resistors and LEDs) on the left side of the LED controller are the basic indicator LED configurations. The brightness of the LED is controlled by a PWM (Pulse Width Modulation) signal. The LED will increase the brightness when the PWM duty cycle is increased.

The above intelligent LED lamp displays alarm information in the manner of another LED indicator. LED alarms are just one of the many communication interfaces that smart LEDs can use. Interfaces such as PLC (Power Line Communication), DMX (Digital Multiplexing), and DALI (Digital Addressable Lighting Interface) are also available.

The flow chart of Figure 4 shows a simple algorithm for monitoring the temperature of the LED lamp and adjusting the lumen size if the temperature reaches a certain safety margin. The "Power On Start - System Initialization" block at the top of the flowchart is the microcontroller initialization block. After the wall switch is turned on, the LED light is turned on, and the block will be configured with LED lights for basic operations such as lumen output and temperature detection. 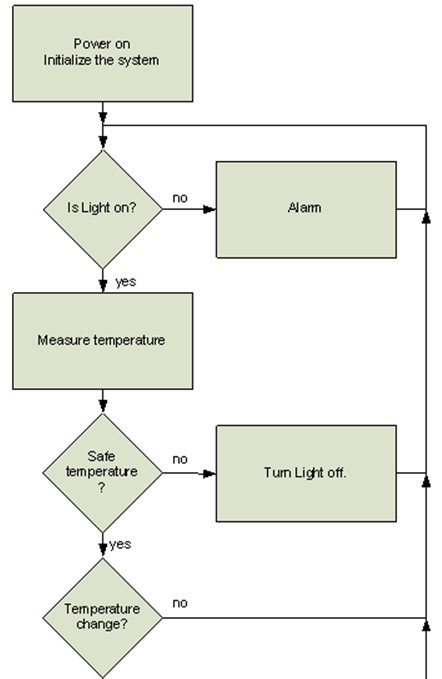 The "alarm" control block controls the sequence of switches after the temperature is too high and the LEDs are turned off by the controller. The next "Is the light on?" block will start the detection sequence again. The only way to exit the alarm condition is to disconnect and power the wall switch again.

The next "Detect Temperature" block will detect the voltage at the NTC node. NTC usually changes nonlinearly with temperature, so the detected voltage can be compared according to the comparison table. This temperature will be used for the next two control blocks.

The function of the "lights off" block is to turn off the light when the LED light temperature is in an unsafe range. Next is the "Do you want to turn on the light?" block and restart the test sequence again.

The "Maximum Lumens" block is used to determine if the LED light is set to the maximum lumen output. If the lumen output reaches the maximum value, re-enter the "Do you want to turn on the light?" block and restart the detection sequence.

When the previous control block detects that the lumen output has not reached the maximum value, the "Lumens rise, dimming indicator" block is triggered. The control block will increase the output by one level according to the configuration during the initialization block, and will also turn the indicator LED down one level to match the lumen increase to the indicator dimming, and then restart the detection sequence.

When the "temperature rise" block detects an increase in temperature, the "minimum lumen" block is triggered. If the lumens do not reach the preset minimum value, the flow leads to the "Reduce lumens, brighten the indicator" block. If the lumen output reaches the preset minimum value, re-enter the "Do you want to turn on the light?" block and restart the detection sequence.

The â€œLower Lumen, Brighten Indicatorsâ€ block will lower the output by one level depending on the configuration during the initialization block, and will also turn the indicator LED up one level to match the lumen reduction to the indicator increase, then restart Detection sequence.

The above flow chart shows the case where the LED light remains off during the input power cycle. A slight change in the flow provides a sequence of monitoring the temperature after the lamp is turned off and re-opening the LED when the temperature falls below the safe limit.